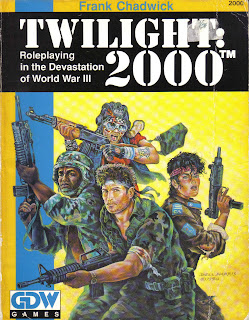 So I was thinking more about this. What timeline to use? Mid to late 70's? Early eighties 83-85? Modern times? Maybe something spun out of the ongoing crisis in Ukraine? I'm kind of leaning toward 1983. Maybe something spinning out the Able Archer 83 exercise. Something to ponder.
Posted by Uncle Sam at 10:41 AM No comments: 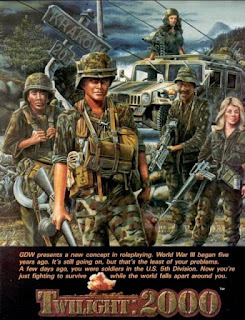 So, was really bored at work today. Saturday, slow, and short day. Perfect recipe for "don't give a rats ass" drink coffee and cruise the intarwebs. So I was researching "Team Yankee" the board/war game. Based on Harold Coyles book "Team Yankee". Which is in turn based on Sir John Hacketts "The Third World War". I find all this fascinating, having grown up during the eighties. I actually remember the cold war. It was sometimes kinda scary. (I'm looking at you Able Archer 83). So anyways I was cooking dinner tonight and was thinking to myself. You know what would be cool? What to my knowledge hasn't been done yet? OSR'ing Twilight 2000. I think this would be seriously cool. Course the system itself would have to be heavy screwed with. Radiation, chemicals, disease. then the skills and paths, packages, all of that. I think if I do this, which I'm thinking I will. (Because you know I dont have enough projects on the back burner) I will start with Army career life paths. (Sorry Marine Corp, I love ya baby you will be next.) Keep it small at first just the basics as far as weapons, vehicles, and etc. Yeah this is gonna be really sweet.
Posted by Uncle Sam at 7:39 PM No comments: 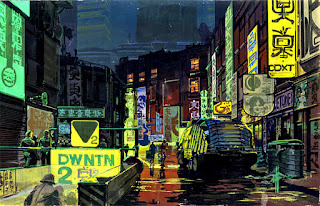 So I've had an idea about a cyberpunk/dystopian/dark future setting. Probably sparked a bit by my discussions with a kid at work about Akira. I told him to watch the anime, and then lent him my TPB of the manga. Anyways, so I've had some ideas rolling around in my head and so like a I do will the majority of my settings I slapped down an idea list. 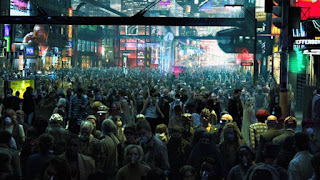 This is a bigger list than what I usually put down. But it just kept on flowing.
I see a mash up of modern day Detroit, Flint, Mexico City, and Brazilian Favela's glued together with the Blade Runner Los Angeles, and Akira Neo-Tokyo. Rampant crime, gangs, and drugs. A filthy dark existence. Remnants of a catastrophic war, linger in places, minds, and people.
Posted by Uncle Sam at 9:34 PM No comments:

On Elephantmen, and such 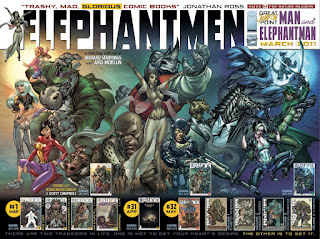 I was reading about some dystopian literature earlier. Started thinking about it, a dystopian theme that is. Thinking about how to game it. I thought you know what would be cool, gaming "Elephantmen". Then I though, what system to use? That came quick and easily. "After the Bomb". 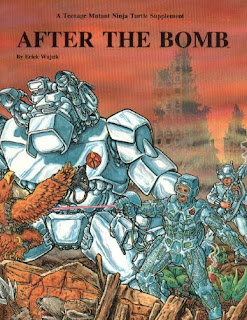 I have dug that setting since the original came out. 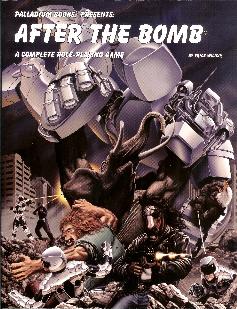 Then the Second edition came out. OMG! Good stuff became unbelievably awesome. So I'm running all this through my mind. You know what I kind of have a hankering for running a "Road Hogs" game with after the bomb. Gotta get ideas to paper. Talk to you folks in a minute.
Posted by Uncle Sam at 7:00 PM No comments: 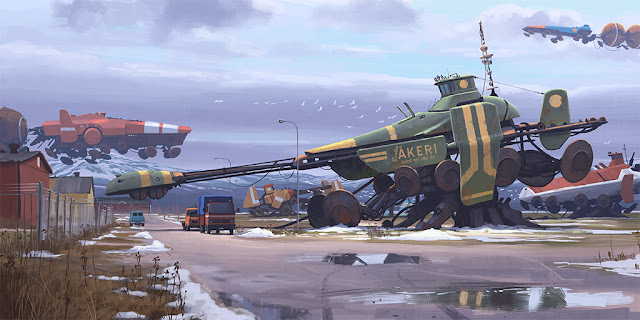 OK this is a little away from my norm. I was surfing about and came across Simon Stalehags art. It is awesome! I love it! As I seen described else where its old rusty volvo sweden futurism. I think its just about cool ever. Check it out here. A ton of awesome 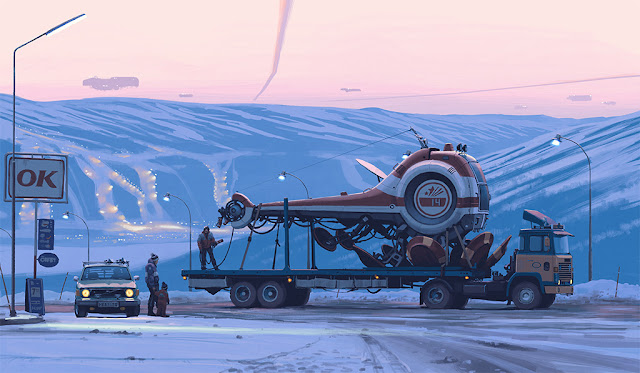 So a ranger, druid, and barbarian walk into a bar...

Which wine goes with dragon turtle?

Three potions for the price of one? How can I go wrong?

This would be a nice place if the damn hill giants would stop stealing the cows.

Legend has it the Bastard Sword of the three fingered hand can be found in the gully's of the Rorsch Badlands.

It ain't the ale talk'n. I saw'em wit my own eyes. Rubies as big as yer fist!

What does the stable owner mean when he say it's the "Cadillac" of mules?

Since when has the thieves guild run things around here?

Is the ring the hill giant is wearing, actually the Crown of Bignus?
I don't care how many fights he's won. He's just a halfling....

The local Dwarf clan has challenged your party to a game of horse shoes. Just think, you used to think that set of +1 ringer horseshoes were worthless.

Who's killing bards with their own instruments?

It's easy money, you just need to liberate us some horses. 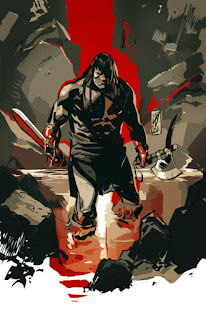 What evil lurks in the Sargon woods?

No one's seen anyone at the Cragin Keep in weeks. But screams can be heard from inside every night.

A horrible demon has taken over Hagensburg. But the people seem happier than ever.

Word among the Dwarves spreads. Anyone who returns the Hammer of Norj, shall receive a king's ransom.

Times must be tough. It's been fifteen years since we've seen goblins this far south.

As you enter the high mountain village of Lathorin. You notice not a soul. Where is everybody?

The King has put a bounty of 5gp per giant rat killed in the slum quarter of the city.

At the cross roads of Shepperd's way, and lonesome road stands a decrepit gallows from which a corpse still hangs. A corpse Which seems to come and go as it pleases.

Orcs have laid siege to Pardition for weeks. How can you get supplies in, and more important the treasure out?

What do you mean, the holy water was tainted?
Chaplin Hill is holding its annual swordsman contest.

Where have all the gnomes gone?

Goblins and Humans fighting together against the Lizard Folk?

Bring me the head of Rommel Churkan!

Johnstown has been flooded with black lotus.
Posted by Uncle Sam at 7:09 PM No comments: 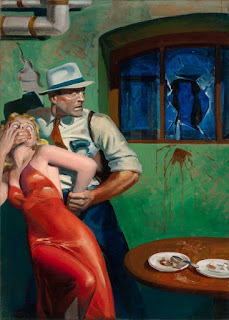 So I know what your thinking. This blog used to have new content posted all the time. Whats the deal? Well heres the deal. Been in a bit of a funk. Which I'm coming out of. Plus with my wife's health issues. Its been creativity destroying. But heres the big reason. I look at kickstarters. Even ones that dont appear shady. Give me this money and I will write this great what ever. That seems like a fucked up model to me. I honestly forget the author, I want to say Kevin Crawford (I apologize if I'm inncorrect in that). He got it right. The book is written before the kickstarter starts. That seems to be the way to go if you ask me. Thats the way I'm running things. No I'm not doing a kickstarter. But when its ready that's when its gonna get released, and for free at that. I may release some snips here and there. But I want to wait for the big reveal. Systems mostly done. Gotta write the fluff, and flesh it all out. So there is more to come don't worry. In between though. I do plan on posting some of my lists of plot hooks and other cool, useful stuff.
Posted by Uncle Sam at 9:01 PM No comments: 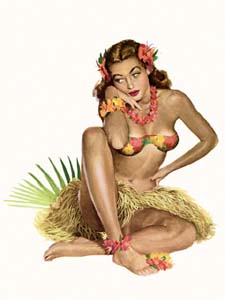 So I've been rethinking my choice of system for Hawaiian Noir. It's not that I don't like it. Its just, I don't know, blah to me. Is it a momentary thing? I don't know that either. But I think I want to go another direction. Old, and new school smashed together. More importantly simple. The KISS principle is something I keep coming back to in most things. For example, back in the day I loved me some 3.5. Now if I look at making a character I just feel the sense of ugh. So tedious, and level plotting bullshit. I also look at classes (in any edition) and think man, that really can lock one into a mind set. I want something more malleable. So a character isn't just a Cop. But they could be a dirty cop, a gunslinger cop, or lovable neighborhood cop. All with little tweaks that while they are cops, their are some differences that separate them.
Then armor. Not that its gonna come up much in such a game. But how to handle it. Standard "harder to hit", damage reducing, ablative? My mind runs in circle back and forth over that.
Then vehicles. Treat as creatures so to speak? Or some other way.
Then bennies. Some people hate them, some love them. I personally don't care either way. At first I though, hey that would be an ok thing. I love pulp action and think bennies are great for that. But the more I think about it, its wrong for noir. Way wrong. Oh, your about to be shot. Tough, that's how life goes in the big city, chief.
So a lot of revamping in my head. Trying desperately to put it down on paper so to speak. But life has had a ton of psychotic episodes plaguing me. Cursed nightmares of true fact reality. Pummeling my free time and will. Leaving me is a malaise. But I'm trying to work that out. Cast out the destructive demons in my reality. Forge ahead, boldly, with positive attitude in all things.
Posted by Uncle Sam at 8:06 PM No comments: 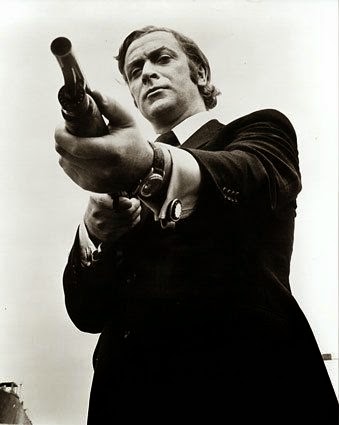